Mrs. Ammara Farooq Malik  founded the Seeds of Education,Policy & Legal Awareness Association (SEPLAA) in 2004 while it was a part of the Community Club for the students of the Metropolitan University of Law & Social Sciences. In 2008, SEPLAA was relaunched as a separate entity. In January 2010, Mrs. Ammara Malik she became the Founder and Executive Director of the SEPLAA Foundation. Since 2016, it has evolved to become the SEPLAA (Seeds of Education, Policy, Legal Awareness & Advocacy) Foundation and Think Tank.

Mrs. Ammara Malik has over twenty years of professional experience as a lawyer, law professor, entrepreneur, social entrepreneur, development consultant and freelance journalist with several legal and research articles published to her credit. She is currently heading the SEPLAA Foundation & Think Tank as its Founder & Executive Director.

She established Impact Change Xcelerator (ICx) Seplaa International, the first social entrepreneurship for peacebuilding incubator in Pakistan in 2013. Based on her work Ms. Malik was able to present her research paper on ‘Innovative Solutions to Promote Peacebuilding: A Case Study Analysis of the Social Entrepreneurship for Peacebuilding Model in Pakistan and its Application in Iraqi Kurdistan’ at the International Symposium on Peacebuilding & Education, University of Duhok, Iraq, organized by the UoD in partnership with UNICEF, Center of Global Affairs New York University (USA) and the US Embassy in Iraq. Mrs. Malik was the only Pakistani whose paper was selected from several distinguished practitioners from across the globe when she presented at the University of Duhok in Iraq under the Center for Global Affairs New York University and UNICEF in 2014. She was also selected for a South and Central Asian Group to participate in the United States International Visitor Leadership Program on the theme ‘Strengthening Civil Society’ in the same year.

A seasoned educationist with over 10 years of teaching experience, she has worked with several national and international institutions as a law professor, educational leader, social entrepreneur as well as senior consultant. Some of the institutions she has worked with include the Center of Global Affairs, New York University (USA), Lahore University of Management Sciences (LUMS), IBA Punjab University, Metropolitan University of Law & Social Sciences, University College Lahore, Pakistan College of Law and SKANS School of Accountancy.

Her many activities range from field disaster relief during Pakistan’s nearly yearly monsoon floods, to voluntary mentoring of youth and women, to recommending policy reforms for CVE, education and child domestic workers to the government. She is advisor to several social enterprises and is the Founder of the SEW-e-GAP Women Empowerment Program that has over 1200 professional Pakistani women as members. To date under her leadership the SEPLAA Foundation has benefited over 80,000 children, youth and women in economic and social empowerment including health, education and peacebuilding, climate change and environment awareness and community development.

She and her SEPLAA Think Tank team have promoted the concept of involving children, youth and women in green architecture promotion in Pakistan through the campaign ‘Urban Green Roof Tops for Climate Resilience’, at the 5th and 6th Asia Pacific Climate Change Adaptation Forum events organized by the UN Environment Program and sponsored by the ADB held at Sri Lanka (2016) and at the Asian Development Bank headquarters in Manila (2018).

She has been Advisor to the youth climate change resilience advocacy program ‘SYLC 100 Leaves’ Campaign that was organized in Sri Lanka (2016), Singapore (2017), Maldives (2017) and the Philippines (2018) and was appreciated at the 5th Asia Pacific Climate Change Adaptation Forum as well.

She is an international expert in the policy and legal development sectors and regularly gives seminars and speeches in national and international conferences on ‘Legislative Reforms’, ‘Policy Debates’, ‘Leadership’, ‘Women Empowerment’ and ‘Peacebuilding’. 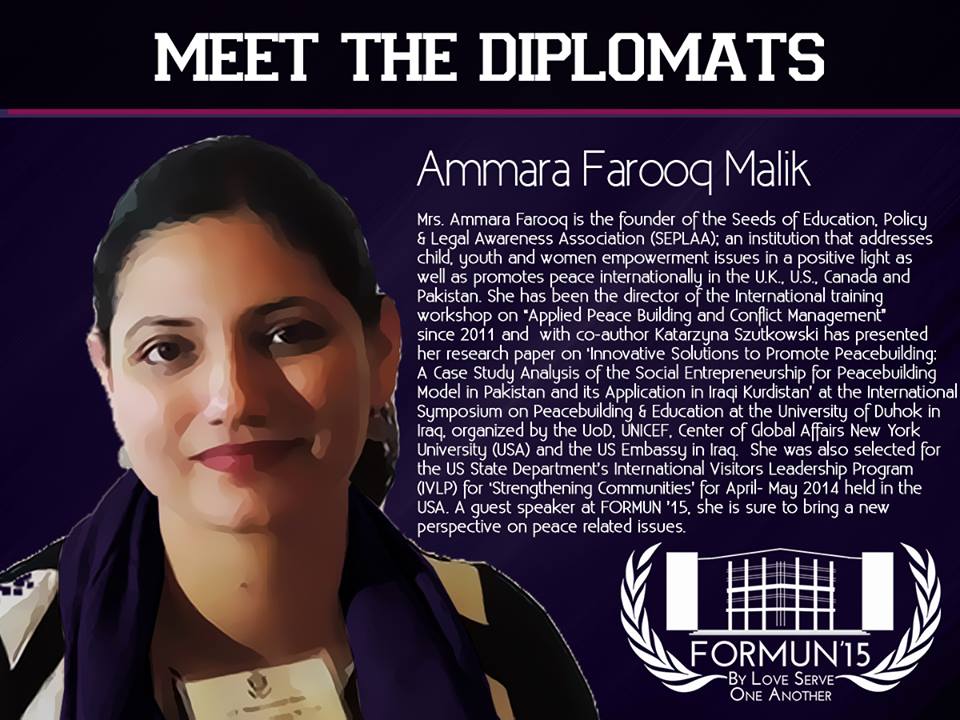