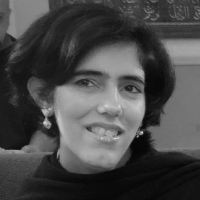 At ISW Think Tank we believe that ideas have consequences. Our research, discussions and analysis in impact range from development, to foreign policy and trade.

Ammara is a doctoral candidate in action based leadership, social entrepreneurship law and policy at Business School Netherlands. She has an MA in Political Science from the Punjab University and an LL.M. from the University of London. She is the founder of SEPLAA Enterprises and the SEPLAA (Seeds of Education, Policy & Legal Awareness Association) Foundation. She also works as a social enterprise and corporate lawyer & development consultant in Wyne Malik Law Consultants, the first social enterprise law firm in Pakistan. She is an international speaker having presented during various forums and conferences in New York, Washington DC, Minneapolis, Duhok (Iraq), Colombo and Maldives.

Her research interests lie in social enterprise management, development and gap analysis of trade promotion policies including environment related national and international policies. She is especially interested in international diplomacy and the economic foreign policy of Pakistan.

ISW owes its research findings to national and international dialogues, collaborations and joint research. Some of our recent contributors are:

Angela Movileanu is the director of Open Think Tank in KRI dedicated to research in the politics and policy of Kurdistan Region
of Iraq www.ttopen.org , and researcher at the Center for Research and  Studies in Sociology, at ISCTE, Lisbon, Portugal
http://www.cies.iscte.pt/en/investigadores/ficha.jsp?pkid=421 . Her main activities lie between researching and teaching comparative politics.

She is a native from Republic of Moldova and is fluent in Romanian, English, Italian, Portuguese, Russian, and learning Kurdish.
Her major dream is a world without political borders, where different cultures are source of unity, not of division.

Katarzyna Szutkowski holds an MS in Global Affairs and Human Rights from the New York University.

She has worked as a Peacebuilding Consultant at the SEPLAA Foundation, US Chapter from 2011-2014. Presently she is also actively participating as an international speaker at the SEPLAA Young Leaders’ Club.

She has presented in international conferences in Iraq, US and online in Pakistan. She has an interest in human rights, gender, child rights and peacebuilding.

Susan Sadeed holds a masters degree in International Management and a bachelors degree in Economics from the University of Pune, India. She is a management professional and has a sound knowledge of social, cultural and economic, human rights and political issues that are currently affecting the world.

Susan has worked for several projects with several organizations during her school life such as UNOPS, HELP, UNICEF.  On 2011, she joint Humanitarian Organization for Local Development (HOLD) and worked for different projects and hold numerous roles within the organization, including business management instructor, Local trainer of civic education, and Administrative and finance manager. Currently she works for Coordination and Rehabilitation of Development Services for Afghanistan (CRDSA) as project Assistant, and she is voluntarily works for the project of Human Rights Activists Mobilization as head of Elimination of Violence Against Women Committee with Humanitarian Assistance for Women and Children of Afghanistan (HAWCA).

As mentor to hundreds of Farahi girls, she was named “Gap Bezan Hero” in 2012. On February 2013 she created a civil society association called Social Organization of Initiative Women (SOIW) through which she could play a significant rule by conducting awareness raising campaigns to local communities encouraged people to participate in election. On 2014 Ms. Sadeed participated in International Visitor Leadership Program (IVLP). Susan hopes to continue her work as a leader and a role model and advocate for human rights and women’s rights for women and girls in Farah Afghanistan.

He authored two investigative books, and translated other two including General Daniel Bolger’s book” Why We Lost”. He is now working on his fifth book “The Political Mistakes in the Modern History of Afghanistan”.

Mr. Khadim is a Human Rights Lobbyist and a young political activist. He is Shamshad TV’s International Political Commentator and columnist for Weesa National Newspaper.

Thulasi Muttulingam is a freelance journalist from Sri Lanka. She has been a journalist since 2008 but in 2013, she quit her full time journalism job in Colombo (the capital city) to move to the war torn areas of Northern Sri Lanka, which she felt were not getting adequate coverage in the news. She firmly believes that in order to report well, the reporter needs to be on the ground, talking directly to the people – a concept that many media houses in her country unfortunately ignore citing budgetary concerns.

Apart from her journalism work, she also runs a Facebook page called Humans of Northern Sri Lanka (inspired by Humans of New York) to raise awareness on the people, issues and culture of Northern Sri Lanka (predominantly made up of the ethnic minorities of Tamils and Muslims as opposed to many other parts of the country which are predominantly Sinhalese).
A 30 years’ long civil war has torn her country apart and left the different ethnicities pitted against each other. She believes fervently in reconciliation and reaching out to prevent the tragedy of another war. Her journalism and advocacy work are all geared towards this goal of peace rather than war.